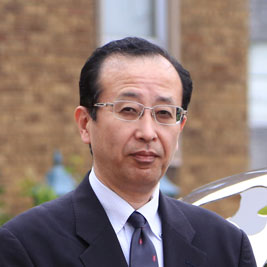 Our lab is interesting in the mechanism how regulated cell death maintains tissue homeostasis under physiological conditions, and also dysregulated cell death contributes to the development of many pathological conditions, and acute and chronic inflammatory diseases. To achieve these goals, we have been working on the function of cellular FLICE-inhibitory protein (cFLIP) and interleukin (IL)-11.

Apoptosis is a prototype of programmed cell death and plays a crucial role in the development of various organs and elimination of unwanted cells. Recent studies have revealed another type of programmed cell death, which is referred to as necroptosis (Nakano, Curr Top Microbiol Immunol 2015). Necroptosis is executed by two related kinases, receptor-interacting kinase (RIPK)1 and RIPK3, and a downstream effector molecule, mixed lineage kinase domain-like (MLKL). Cellular FLICE-inhibitory protein (cFLIP) is a catalytically inactive homolog of the initiator caspase, caspase-8. CFLAR gene encodes two proteins, designated a long form cFLIP (cFLIPL) and a short from cFLIP (cFLIPs) due to an alternative splicing. Since Cflar-deficient mice exhibits embryonic lethality by enhanced apoptosis and necroptosis, it has been unclear whether cFLIP plays a role in maintaining tissue homeostasis. We previously reported that cFLIP is a very unstable protein and degraded rapidly in NF-kB-deficient cells upon TNFa stimulation (Nakajima, EMBO J 2006; Oncogene 2008). Moreover, we recently generated conditional Cflar-deficient mice such as hepatocytes, intestinal epithelial cells, and epidermal cells, and reported that cFLIP plays a crucial role in preventing various types of cells from apoptosis and necroptosis (Piao, Sci Signal 2012). Using TNFa-induced acute liver injury in hepatocyte-specific cFLIP-deficient mice as a model, we have very recently reported that depletion of myeloid cells exacerbated liver injury along with aberrant increase in serum histone H3 in mouse serum (Piao, Hepatology 2016).
To further investigate a role for cFLIP in necroptosis, we have generated cFLIPs transgenic mice. We are currently determining whether overexpression of cFLIPs might block or promote apoptosis or necroptosis in vivo and investigating the mechanism.
cFLIP is an unstable protein that is degraded by the proteasome/ubiquitin pathway. Although a previous study reported that an E3 ligase, ITCH might be responsible for degradation of cFLIP, we are currently working on a newly identified candidate that is responsible for degradation of cFLIP.
Since there has been no probe to detect necroptosis in living cells, we are currently working on developing a probe to detect necroptosis in living cells. Development of the probe to monitor necroptosis and generation of transgenic mice expressing the probe might be useful to investigate biological consequences and significances of necroptosis in vitro and in vivo.

Interleukin-11 (IL-11) is a member of the IL-6 family cytokines, and controls various cellular responses, including hematopoiesis, bone development, tissue repair, and carcinogenesis. IL-11 binds to the IL-11 receptor 1 (IL-11R1) and gp130 complex and activates the family of signal transducer and activator of transcription (STAT) proteins. We previously reported that IL-11 is produced by hepatocytes in an oxidative stress-dependent manner and ameliorates acetaminophen-induced liver injury (Nishina, Sci Signal 2012). Moreover, oxidative stress-dependent IL-11 production largely depends on a transcription factor, Fra-1 that is upregulated by ERK-dependent phosphorylation of Fra-1.
We have very recently reported that one electrophile, 1,2-Naphthoquinone (1,2-NQ), induces IL-11 production in vitro and in vivo. We also have found that IL-11 counteracts 1,2-NQ-induced intestinal toxicity through inducing proliferation of intestinal epithelial cells. Further analyses have revealed that NRF2, a critical transcription factor for oxidative stress, promotes translation of Fra-1 gene, thereby upregulating Fra-1 that subsequently induces IL-11 production (Nishina, J Biol Chem 2016). Thus, our present study has revealed an unexpected role for NRF2 in IL-11 production through upregulating Fra-1.
While accumulating studies have shown that IL-11 plays a crucial role in the development of gastric and colon cancer in human and mice. However, the detailed characters of IL-11-producing cells have not been determined yet. To address this issue, we have generated IL-11-GFP reporter mice and are determining which cells can produce IL-11 upon oxidative stress or along with tumor development. Through these studies, we would like to develop a novel strategy to treat gastric and colon cancer by specifically depleting IL-11-producing cells.